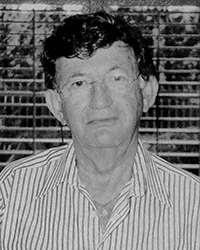 David Kaplan was born in 1928 in Kaunas, Lithuania. In 1941, the Nazis occupied Lithuania, and David and his family were forced into the Slobodka Ghetto. In 1942, they were sent to Sanzai and then deported to Stutthof concentration camp. David’s mother and sister perished in Majdanek, and David and his brother were sent to Landsberg where his brother perished. In April 1945, David was forced on a death march to Dachau and Bad-Toelz where he was liberated by the American Army. David immigrated to the United States in 1949. He met his wife in Mexico, and they moved to El Paso where David became a successful businessman.