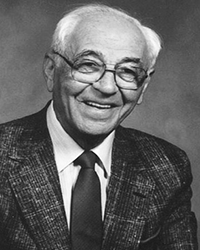 Henry Kellen was born in Lodz, Poland in 1915. His family- parents Moses and Helena, sister Sonia, and brother Moniek- moved to Lithuania while Henry earned his degree in France. In 1941, Lithuania was occupied, and Henry and his family were forced into the Kovno Ghetto. His father and brother were killed shortly after. In 1944, Henry, his wife Julia, and his nephew Jerry escaped the ghetto and were hidden by a Lithuanian farmer until liberation by the Soviet Army in July 1944. Henry, Julia, and Jerry came to the United States in 1946. Henry is the founder of El Paso Holocaust Museum and Study Center.