715 N. Oregon   Please join us for this year's Annual Members' Meeting. We encourage all Museum Members to attend as we conduct important museum business and look to an exciting new year. Join us for a presentation of what to look forward to this year, as well as the voting in of the 2022 Board of Directors, and the presentation of the 7th Annual Henry Kellen Founder's Award. Meeting will be held virtually. To register and receive Zoom login, click HERE     ....Read More 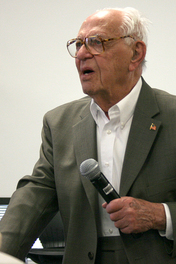 To nominate an individual or group: Nominations should include the nominee's name, your name, and a short explanation of why you think the individual(s) should be recognized.  All nominations can be returned via email at jamie@elpasoholocaustmuseum.org or via regular mail to El Paso Holocaust Museum & Study Center 715 N. Oregon, El Paso, TX 79902