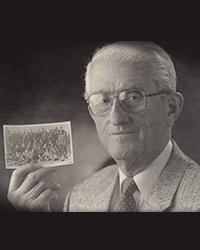 Dr. Larry Gladstone was born in 1922 in Vishniak Chamenitza, Czechoslovakia. In 1943, Larry was forced into a labor battalion digging anti-tank ditches in Poland and Ukraine. In 1944, he was forced on death marches to Mauthausen then to Gunskirchen. Larry survived a deadly typhus epidemic and was liberated by the American Army in May 1945. Larry learned that his sister Clara had perished in Auschwitz, but his sister Edith survived. In 1945, Larry went to Charles University then came to the United States in 1946. He attended medical school in El Paso then married Beatrice Marcus in 1953. They had three children.