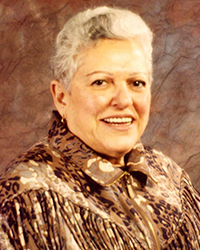 Lucie (Burian) Liebman was born in 1927 in Vienna, Austria. After the Nazi invasion in March 1938, Lucie, her brother Paul, and their parents moved to Czechoslovakia. Paul was sent to Scotland on the Kindertransport. Lucie joined the youth resistance movement, the Maccabeus, who conducted acts of sabotage. In 1941, her father was able to secure immigration papers to the United States. Lucie and her parents took a train to France, then to Spain, then a final harrowing train ride to Portugal. The Burians landed in Ellis Island, New York on May 1, 1941. Lucie married in 1950 and had five children.