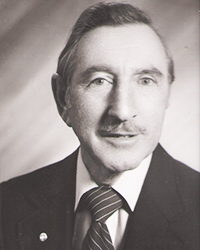 Mark Kupfer was born in November 1929 in Nowy Korczyn, Poland- the second youngest of nine children. During the Nazi invasion, the Kupfer family hid in a bunker to avoid the round-ups, but they were eventually sent to the ghetto. Mark, with his brother and sister, escaped and were on the run for two years. They were caught in 1941. Mark’s brother and sister were killed, and he was imprisoned, tortured then sent to concentration camps. He was liberated on a death march by the American Army on April 23, 1945. Mark immigrated to the United States in 1948. He married Rose Eisenberg, and they had four children.